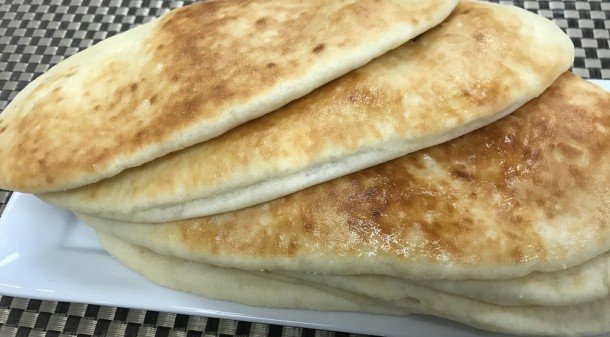 Last week I was asked to host an event with Chris Rollins from Chris and the crew on WPST and a couple of her radio guests that was Indian cuisine themed. It was many of their first times having Indian food.  I was asked to come up with a small menu of a couple traditional Indian dishes and prepare them in the Mrs Gs Community Kitchen. On the menu was Butter Chicken, Basmati rice, Mango Kulfi, and Naan all from scratch. Traditionally a Tandoori oven is used to cook the naan but we don’t have one of those, so I chose to use a Jenn-Air 30″ wall oven JJW2430DS that had broil capabilities. Making Naan is fun and easy to make and the results are fabulous.

First combine water, honey and yeast in a bowl. Stir this mixture together and sit is aside for about 10 min. The sugars in the honey help to feed the yeast and will cause it to foam (active) a little quicker. 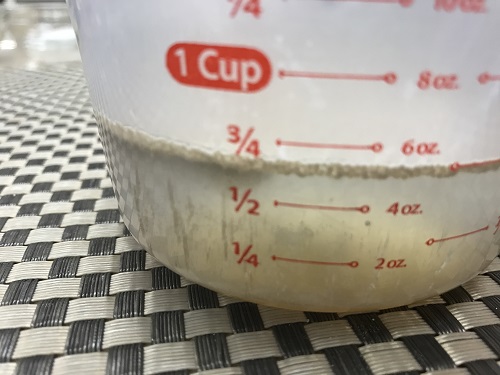 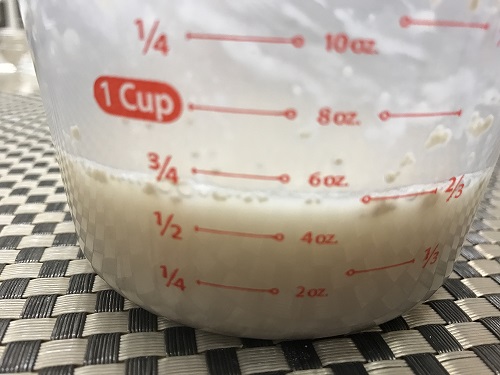 Next step is to gather the remaining ingredients. In a large bowl add the all purpose flour, Greek yogurt (full fat is ideal), salt, and oil. I don’t mix them in the bowl together until my yeast mixture is ready. 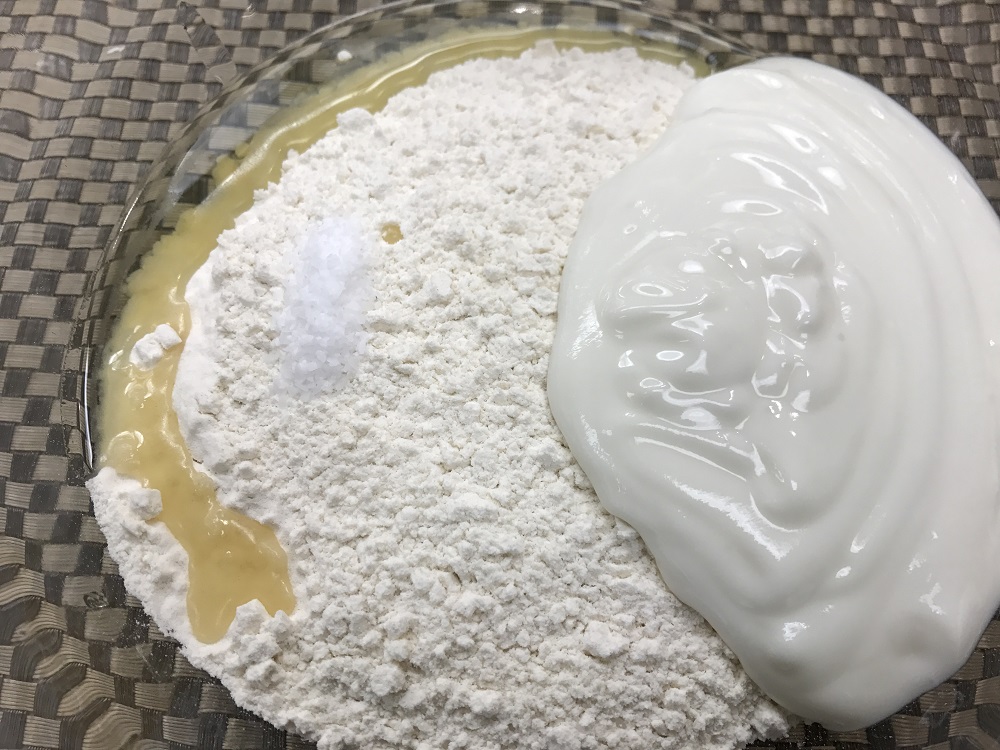 After yeast has bloomed add it to the flour mix and stir until a dough forms. 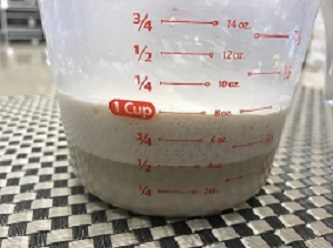 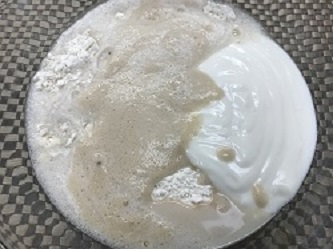 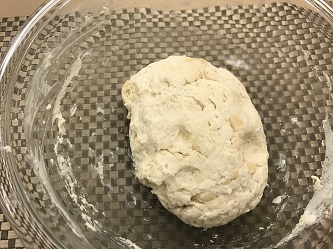 Once the dough has formed, using you hands, knead the dough on the counter top until it becomes smooth. Extra flour may be needed for this step. 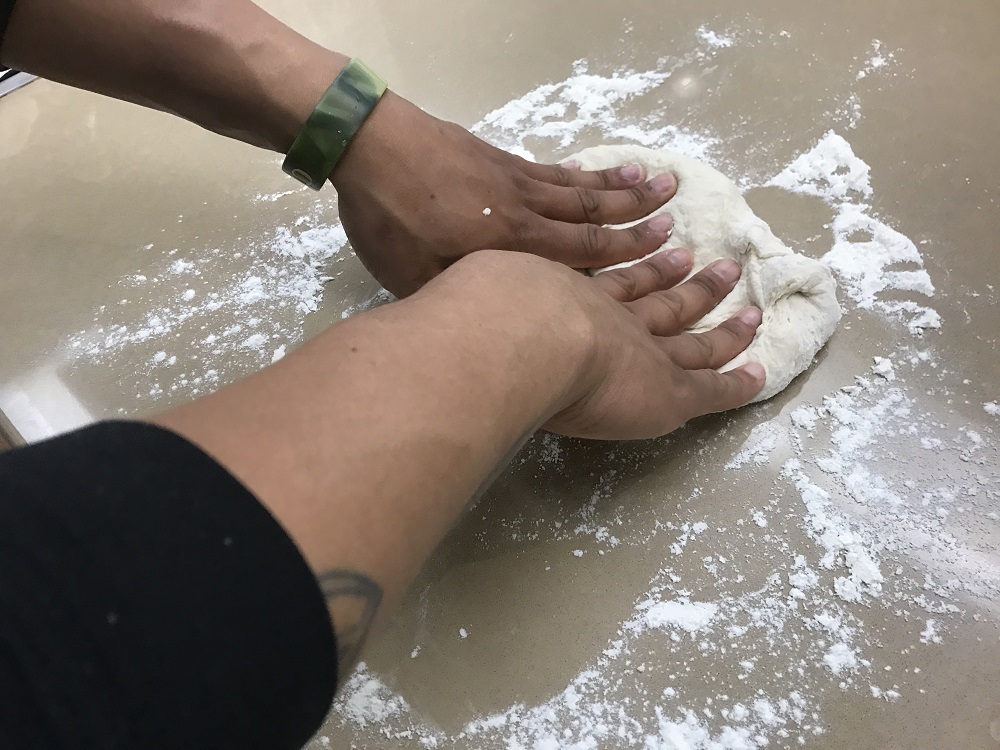 In a clean bowl add a couple drops of olive oil and use your fingers to grease the bowl. 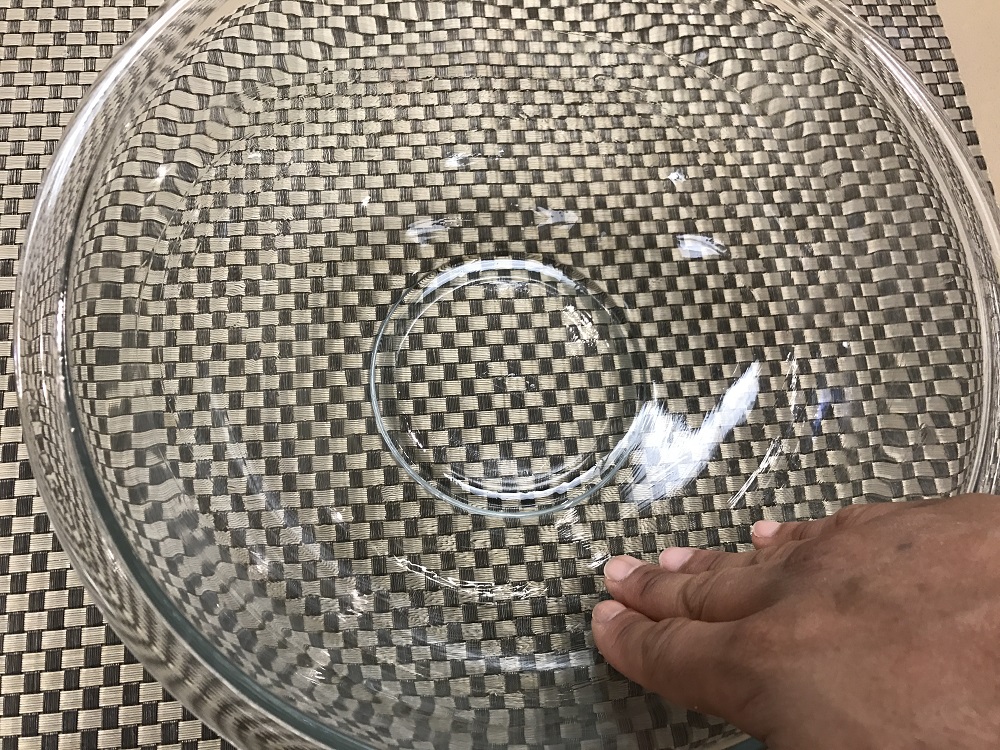 The dough should now be smooth and lump free, place the dough into the bowl adding a few more drops of olive oil on the top of the dough to give it a light coat. Cover the bowl with plastic wrap and sit an area that is about 70-80 degrees in temperature to allow the dough to rise. 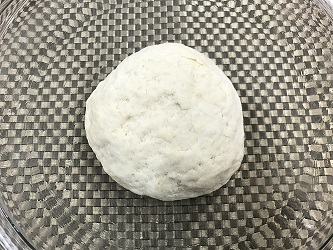 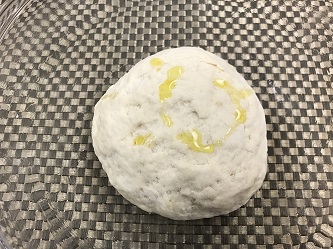 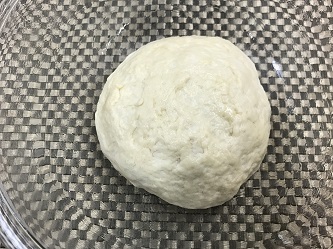 We are looking for the dough to double in size. A good rule of thumb is that the dough should be touching the plastic wrap when ready. 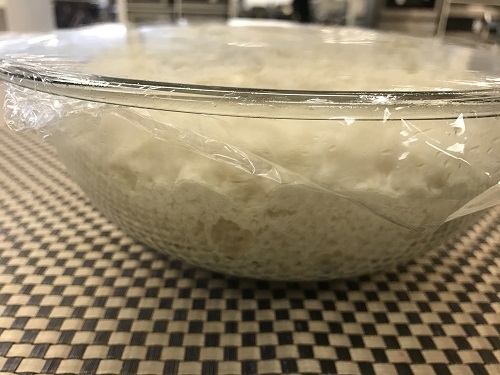 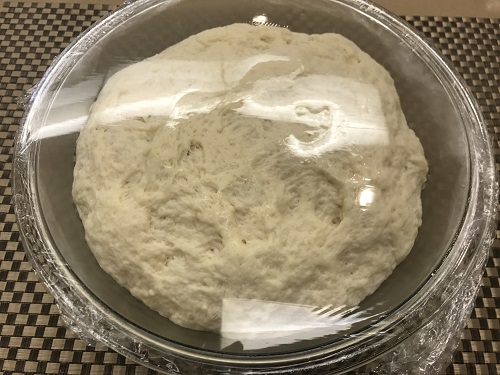 Heat you oven broiler to high or if you can set a temp set it at 525 degrees and adjust the top rack to be about 6 inches away from the broiler heating element. I have chosen to use a Jenn- Air wall oven that has a fully touch control panel which I am easily able to adjust cook settings and temperatures.  Place a sheet tray on the top rack while the oven is heating up, were looking for the sheet tray to be hot while we cook our dough. We need it to have heat on both sides while baking the naan. Traditionally a round oven made out of clay called a tandoori is used to cook naan. 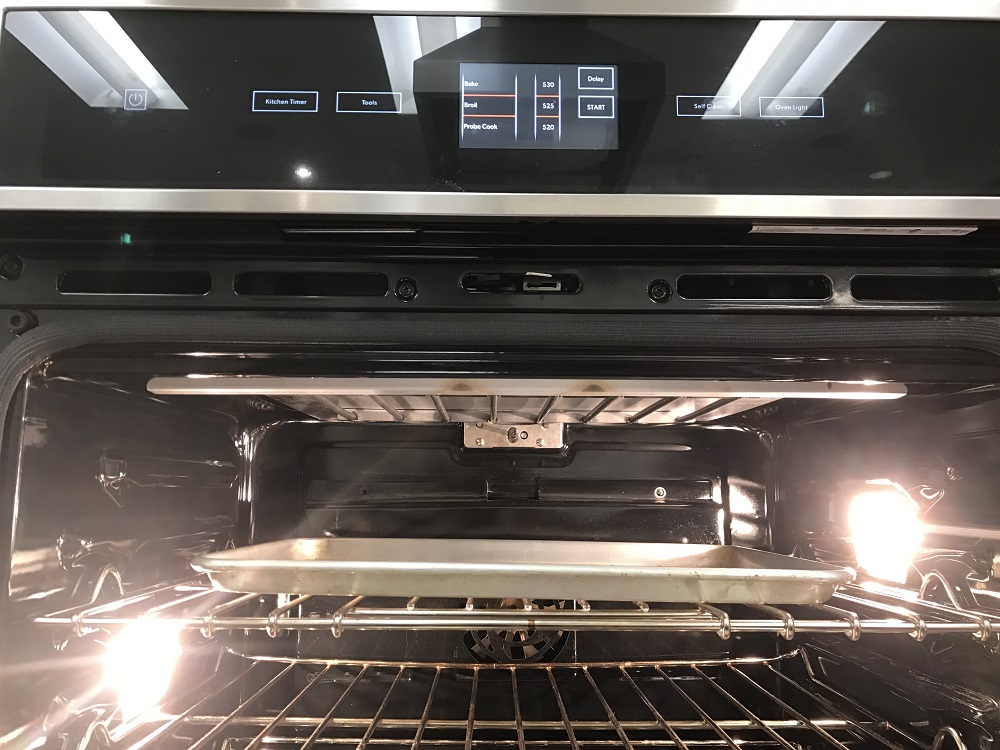 Uncover the risen dough and punch down the dough. Remove dough from bowl onto a lightly floured surface and divide the dough into 8-10 equal pieces. 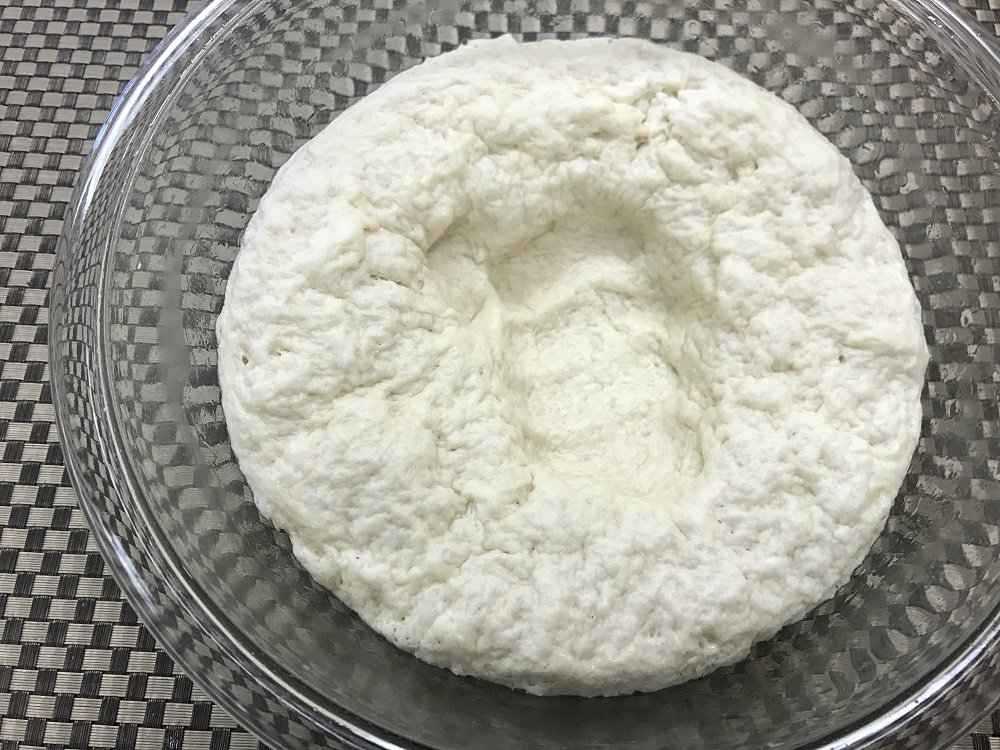 With the equal pieces of dough roll each one into a ball and set aside. Now its time to roll the naan. Grab a dough and use your fingers gently to stretch the dough into a desired shape. 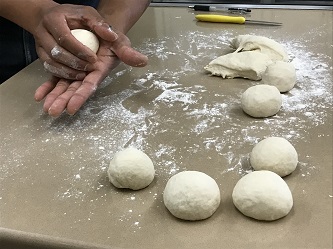 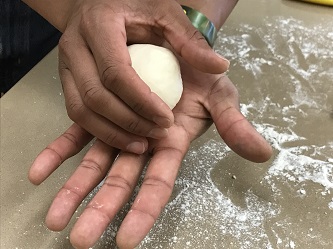 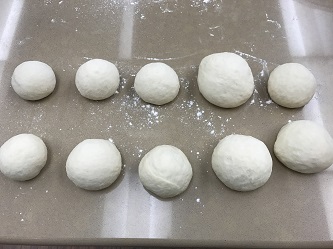 Using a rolling pin on a lightly flowered surface roll out the naan so that it is about 1/8″ – 1/4″ thick. repeat for all of the dough balls. 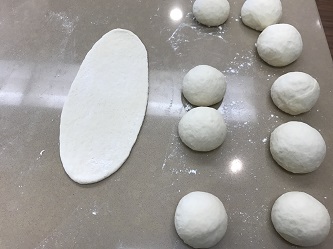 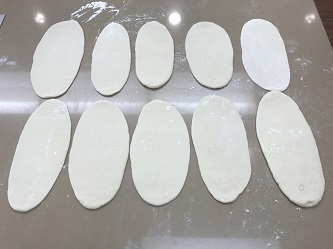 After the oven has preheated and is up to temperature carefully remove the hot sheet tray and place on top of a wire rack to not burn the counter top. Quickly  line 3 raw naans on the sheet tray an place back into the oven on the top rack. KEEP AN EYE ON THE OVEN AT THIS POINT. You are looking for spotted golden brown on the tops of the naan. Once the cooked naan is removed from the oven, brush each one with clarified butter and stack them. Repeat this process until all of the naan is baked. 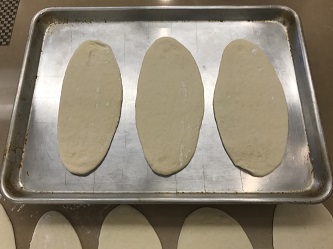 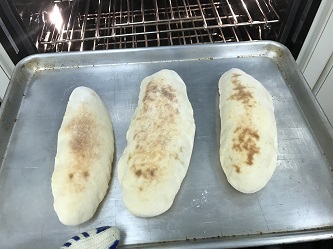 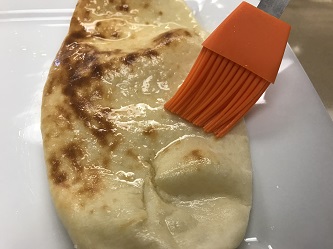 Variations of naan, you can add cumin seeds before baking, or spread roasted garlic on the naan for garlic naan, or even add chopped cilantro in to the dough while rolling it.

I made a sandwich out of some homemade peanut butter and homemade grape jelly. This could possibly be the best tasting PB&J of all time. 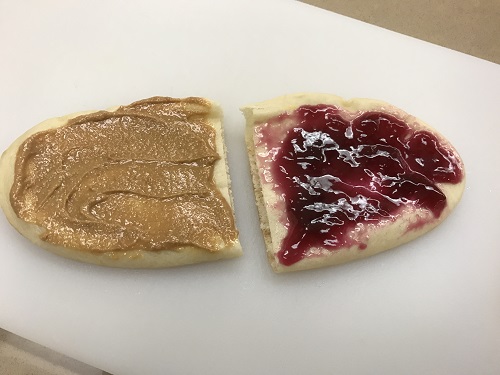 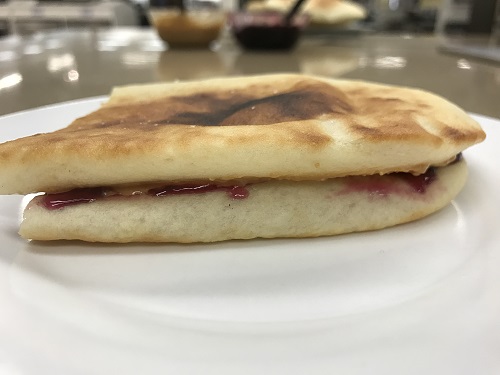